Okay, I Did the Spring Classic Duathlon! 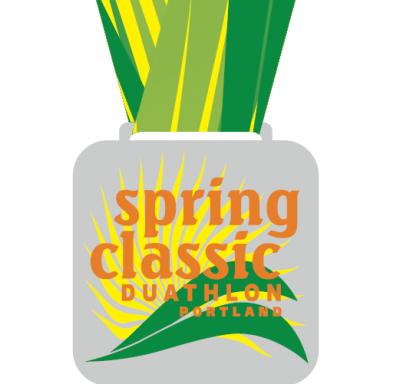 It was raining as hard as it was yesterday, which was fine with me, because I think I do better in the rain than in the sunshine. In races and in life in general. I think. Unless I'm just being delusional. But anyway that's what I think.

The Spring Classic Duathlon started at 10 am with a 3-mile run, which I did in better time than I've ever done before, which I suspect is because I kept saying to myself, "Don't be the last one in, don't be the last one in." And I wasn't. Though I was close. When I got to the bike racks, it looked like all the bikes were gone, but only because most of them were.

Anyway, I passed people like crazy on the cycling part, which I attribute to Derek's excellent training in spin classes and individual and small-group training. But by the time I finished that, a lot of people had already finished the final 3-mile run. Which, okay, I'm glad for them! And when I grow up, someday, I'm gonna be like them!

I wanted to give up so bad, so many times. And I wasn't the only one crying (yes, I admit I cried a good part of the time).  It was hard. Did I already say that? Let me say it again, just in case: It was hard.

On the bike, riding along Marine Drive, which runs along the south bank of the Columbia River, the wind was blowing so hard from the south that you had to lean into it in order to keep from being blown off your bike. I'm not kidding.

Also, it seemed to me that the wind changed direction so I was always riding into it. Would've been great if I was a plane, could've taken off. Another cool thing about that ride: next to the runways at PDX, so you could see the planes taking off.

Another thing: It was raining so hard, and at one point hailing (I think), with the wind blowing the rain and/or hail sideways, that it hit your face like a bunch of needles. Did I mention it was hard?

Anyway, I pretty much walked most of the way on the second 3-mile run, and glad I was able to do that much. Forced myself to jog a few steps, then walk, then jog, walk, etc., so I wouldn't be the last one in. And I wasn't. And I earned a silver medal in my category. The only other person in that category, a 68-year-old woman who passed me about halfway through the first 3-mile run and stayed ahead of me the whole rest of the way, won the gold medal. I am proud to be in company with people like her!

So, in three weeks, I'll run my first half-marathon, which I'm going to work like crazy (I'm going to be acrazing, like Laura!) to prepare for.