Motivation for Training (The Sayings of Derek) 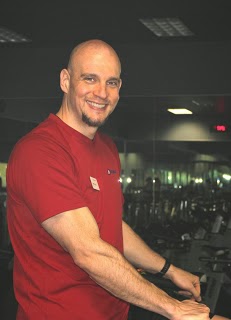 I've just added a "gadget" (the column to the right of the regular posts) to this blog with some of my favorite sayings of Derek Soanka, who has been my trainer since January 2013.

I met him when I attended my third cycling class ever, at the 24-Hour Fitness club at Tech Center in Vancouver.

I had committed to ride with my sisters Neva and Laura the following June, and I was nowhere near ready.  I'd gone to a couple of cycling classes and one body pump class at the gym, and I knew only one thing about preparing for that bike ride: I had no idea how to do it.

Derek was subbing for the regular teacher that day. He began the class by saying, "I know you're used to [that teacher's name], and she has no standards and no discipline. But that’s okay, because with me you’re going to get both."

By the end of that class, I knew he was the person who could help me prepare get ready for the Huntsman 140. I gathered up my courage to talk to him. I said, "I'm going to ride a bike 140 miles in the Utah desert in June, and I need help." He said, "I think I can help you with that." He took my phone number and called me later, and we set up my first training appointment.

He got me to make a commitment: cycling class at 5:30 every Monday, Wednesday, and Friday morning, plus training sessions with him. Ever since then, twice a week whenever I can, and once a week at the very least least, I've been trusting him with my training.

He takes the training seriously, even though he makes it fun (and he has a great sense of humor**). That's part of the motivation, after all. Another motivation is getting results: I've gone from not making it through even a one-minute "out-of-saddle" segment of a cycling class to being able to keep up most of the time, through most of the classes. And when I slow down, when I don't try my hardest, there's no excuse, is there.

I'll keep adding more sayings as I think of them. Do they motivate you? They work for me!

**Here's something he said in a recent cycling class, as the song "Heaven" by Bryan Adams was playing: "I just love this song. It’s almost like heaven. And if you close your eyes and hold your breath long enough, you’ll be in heaven, too. And, don't worry, I know CPR."